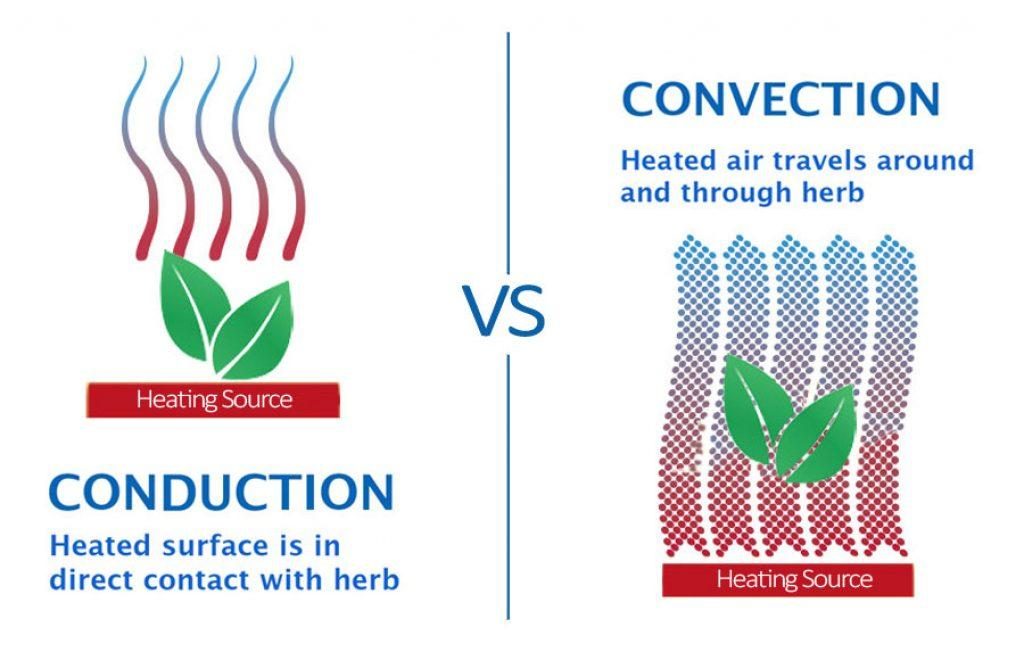 Understanding between conduction and convection made easy!

Before we get too far into this we need to talk about the difference between vaporizing and combusting because these terms are going to be reused in the article.

Vaporizing occurs when you heat your herb just to the point of the THC and other cannabinoids to turn into a vapor. If your vaporizer is working correctly then it won’t get hot enough to burn the actual herb.

If you do heat the actual herb too much then you’re going to get combustion. Combustion is what happens when you light a bowl or joint.

You don’t want a vaporizer that combusts for several reasons. The first is it negates the health reason that many people get vaporizers for in the first. By vaporizing you’re not inhaling the additional smoke from the herb. Combustion is also not good because it can ultimately ruin your vaporizer. These units aren’t designed to combust so when they do it can damage the unit.

Before we compare convection vs. conduction in vaporizers it’s important we understand the two terms. Look, I could give you the exact definition of conduction heat, but it wouldn’t really do us much good. Instead, I’m going to tone everything down a bit and explain the two types of heating in terms that we’re all familiar with.

Convection is a newer and more expensive technology, however, the benefits are usually well worth the price tag.

Convection heating works by moving hot air around your herb instead of it contacting a heating element directly.

Think of the burner flame on a stove, if you place a pot of water with an egg the flame is not touching the egg itself so the shell stays nice looking while the water is heating the egg through convection currents.

The huge benefit here is that you’re not going to combustion of  your material. You’re always going to get actual vapor and not smoke.

A good example of a convection vaporizer would be the AquaDabber. Like mentioned earlier, this technology is going to cost you a little bit more, but you’re paying for quality.

Conduction is often thought of the old school way of making a vaporizer. Truth is, there are still plenty of vaporizers on the market that are still using this technology. For example, the PAX is common brand that is still using conduction technology.

With vaporizers, your herb is vaporized by placing it directly on a heating element. This method of making vaporizers makes for a product that is much less expensive to produce. These types of vaporizers are also usually pretty quick to heat up.

I think the biggest problem with conduction style vaporizers (even wax pens) is that most often some or all of your product will combust.  Some think the bigger and denser the cloud the better so they like heating it hot, they are not vaping they a smoking. That is, instead of getting vapor you’re really want, instead your getting smoke which defeats the whole purpose of using a vaporizer in the first place.

The Best Vape Pen – Conclusion:    Aquadabbers Convection blow the others away!

In the end, it’s very clear who the winner is here . Convection style heating is the better method every time. The problem is, there are so few options available when it comes to convection. Here at 710 we understand this idea very well and are produce the best convection vape on the market. So, if you’re ready for a top-of-the-line vaporizer then you have to try the AquaDabber. With the AquaDabber‘s mess proof design and big power house allows for guaranteed all day use with absolutely no worry of battery life!  If the AquaDabber is out of your price reach, they also offer the High Rise which is compact and affordable with a carb cap for less mess.