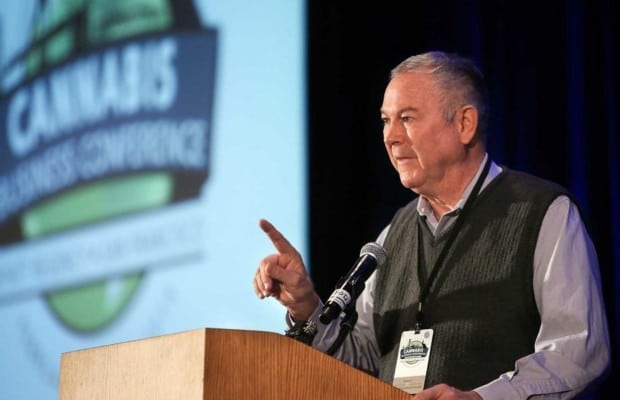 The Future of Cannabis had Investors and entrepreneurs in the budding legal cannabis industry met in downtown San Francisco at the International Cannabis Business Conference (ICBC) to talk business, activism and what the future holds. Arcview Market Research predicted nine states, including California, will pass adult-use legalization measures in 2016 and the legal market is expected to grow by billions, making cannabis the most promising and profitable industry in the nation.

All eyes are on California, the birthplace of the legal cannabis and home to much of the cultivationand activism that has built the industry. With an annual consumption of 1,000 tons of flower cannabis consumed, a multi-billion dollar illegal industry and generations of small family growers whose livelihood could be at stake — the devil is in the details for legalization in California.

At the ICBC, a look at the effects of over-regulation in Washington state, under-regulation inCalifornia and the ideological debates of incrementalism vs. absolutism were highlighted by most of the speakers. As idealists, most cannabis activists believe home cultivation should be legal alongside commercial production. As business owners and realists dealing with federal and state law, incrementalists believe any law that furthers legal access to the plant is a step in the right direction, despite the legislative flaws that may come with legalization laws.

In particular, there has been heavy criticism of Washington’s legal marijuana initiative, I-502, for eliminating the right to home grow, threatening medical cannabis legislation, excluding small businesses and manipulating market prices so much that the adult use industry is not as profitable as once expected.

“The bottom line is that states like California examining legalization, maybe even decriminalization, could still learn from Washington even though we are still working out the kinks,” said Hilary Bricken, an attorney with Canna Law Grow who specializes in I-502 compliance for legal cannabis businesses.

Rick Steves, a travel writer who championed I-502 in the 2012 election addressed the conference on day two as the keynote speaker.

“All eyes are on California in 2016 and I am particularly excited about winning here,” Steves said. “We are partners in this and it is so exciting to smell victory. As we know, when California goes that will start an avalanche that is the end of this war on marijuana.”

Steves said there are two “energies” in the cannabis world — people seeking financial gain in the Green Rush and those that are really interested in a drug policy reform movement “motivated not by business but by civil liberties.” Still, Steves says both movements should support any form of legalization, even if the details aren’t ideal.

“I know the laws we passed [in Washington] are disappointing to some and I respect those who oppose it, but we are on the same team and the debate is idealism or pragmatism. You have got to deal with that political reality if you want to get anywhere,” Steves said.

Despite majority support for adult use legalization in California, state voters have rejected initiatives in the past. In 2010, Proposition 19 failed by 3 percentage points. During the 2012 and 2014 election cycles, no group in California successfully united campaign financiers and stakeholders to put another legalization initiative on the ballot. Many in the state, however, feel a 2016 victory is inevitable.

“Winnable is not the same thing as winning. We have a lot of strategic lessons to learn here in California,” said Dale Sky Jones.

Jones is the Chancellor of Oaksterdam University (OU). OU was founded by Richard Lee, who self financed the bill Jones was a spokesperson for the Prop. 19 campaign as well as a driving force behind the Reform California group, which is planning a 2016 adult use initiative.

“Voters must believe that it is worth it, that the outcome is better than it is now,” Jones said.

Jones added that ensuring small businesses have a major stake in the legal market is essential for getting any initiative passed in the state.

“Our nation is built on small and family businesses,” Jones said. “There is no reason the cannabis industry should be any different.”

Still, activists and entrepreneurs agree, the future holds more legal marijuana in more places, but activists will still need to push for reforms. Aundre Speciale, the owner of Berkeley dispensary CBCB, has been active in the legal market and activism for over 25 years. She’s noticed the transformation of the industry and is hopeful that there’s more room for growth.