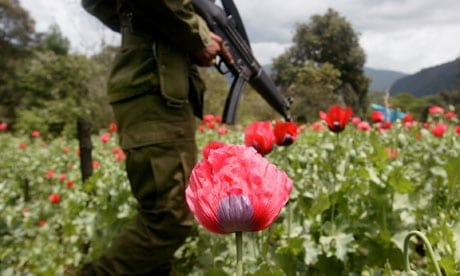 With multiple state marijuana initiatives winning voter approval in the 2014 midterm elections, legalization proponents are already hard at work in states like California, where passage of a comprehensive initiative in 2016 could provide the policy “legitimacy” reformers are seeking. However, states should proceed cautiously as it is too soon to fully assess the complex economic and public health and safety implications of state-by-state legalization. More broadly for the nation, it is also important to address what the legalization debate has thus far either ignored or oversimplified: the effects on international illicit drug markets, transnational organized crime and American foreign policy.The illicit drug economy is a complex system run by resilient criminal networks. Despite the move toward legalization, the destabilizing influence of illicit economies and transnational crime will endure, and a sustained national effort will still be needed to address this evolving threat.

Assuming state-by-state commercial legalization continues, illicit marijuana markets will persist until legal and black market prices converge and interstate arbitrage opportunities disappear. Neither of these outcomes is likely in the near-term. States face the very difficult task of managing consumption levels via unique regulatory regimes that promote scarcity, while simultaneously trying to price out illicit suppliers. Further, with no regulatory harmonization among states — and no credible movement to legalize federally — interstate arbitrage opportunities persist and are ripe for exploitation by illicit traffickers. This is not necessarily an argument against experimenting with legalization, but rather an acknowledgement of market dynamics and the agility of modern criminal networks. The good news ismarijuana traffickers should face shrinking profit margins in commercially regulated states that progress toward competitive pricing.

Let’s also acknowledge that well-established illicit economies have staying power. If marijuana legalization sufficiently erodes market share for transnational criminal networks, they will migrate toward more profitable segments of the illicit market, not just drop out, and will continue to threaten stability in the Western Hemisphere. For example, cocaine, heroin, and methamphetamines continue to cross our borders via robust networks, and in most cases, cocaine being the exception, consumption in the United States is on the rise.

Transnational crime is an evolving national security threat, as well. The boundaries between drug, human, and weapons trafficking, as well as cyber-crime and terrorism continue to blur. This problem is not unique to the United States, as criminal networks supply globalized illicit markets and pose destabilizing and perhaps existential threats to several nations where the United States has important interests. Acknowledging this reality, the Obama administration distanced itself from the much maligned war on drugs, and instead reframed the problem as a persistent public health issue, with international focus shifting to the broader goal of combatting transnational criminal networks. On balance, this approach better recognizes the enduring nature of the challenges.

While marijuana legalization is no panacea for the illicit drug problem, history suggests new ideas are desperately needed. Deliberate and limited regulatory experimentation makes sense in this context. However, illicit economies and criminal networks will persist, and so must the international effort to combat them. This includes sustaining some important elements of the “War on Drugs,” a historic misnomer — such a war can never be “won” — that persists in popular culture and is sadly now used to marginalize efforts to address the broader transnational criminal threat.

Some of the criticisms levied against the “War on Drugs” are well justified. However, its shortcomings should not be misinterpreted as reason to abandon the fight against illicit drugs and transnational crime; indeed public health, regional stability, and national security are all at stake. Instead, illicit economies continue to adapt, and so must our strategies to address them. Specifically we must adjust our strategies to better address the resilient nature of illicit economies and their ability to respond to an evolving domestic drug policy landscape. This will require a coordinated, flexible, systems approach, with the following critical elements for the United States:

• Reducing U. S. demand for illicit drugs. The impacts of state-by-state marijuana legalization on numbers of users, incidence of addiction, and consumption of stronger illicit drugs remain an open question. This is a critical area to monitor as legal markets evolve and data becomes available from new prevention and treatment programs funded by marijuana tax revenue in states like Colorado.

The strategic goals of this macro-effort should be to improve governance, prosperity, and regional stability by reducing the size and extent of illicit markets and their associated criminal networks. In addition to the obvious considerations inside our borders, the evolving experiment in marijuana legalization must also be debated within this broader, more complex international context.

Jason Tama is a federal executive fellow at The Brookings Institution in Washington, D.C.