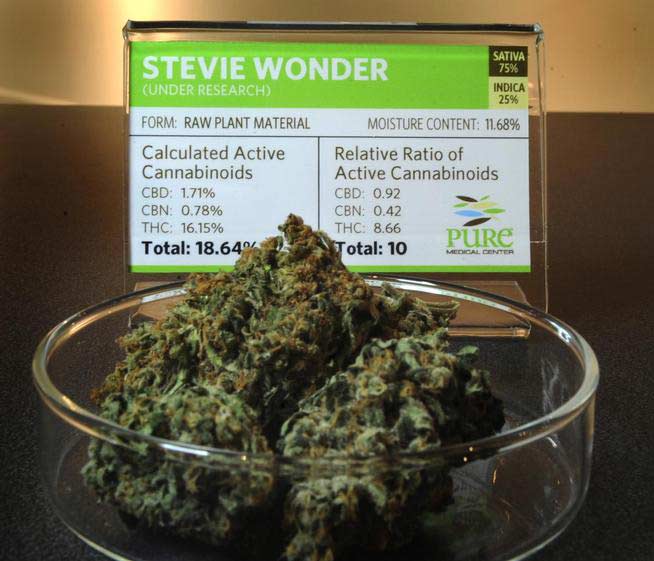 Those are the headline findings of an important new study published Feb. 16 in the journal Lancet Psychiatry. Researchers obtained data from 410 South London patients sent to the hospital for a first-episode psychotic incident (meaning they hadn’t been previously diagnosed with disorder), and compared it to data from 370 control individuals living in the same area.

Compared with someone who had never smoked, a weekly user of high-potency weed (defined here as having greater than 15 percent THC content) was about three times as likely to be diagnosed with a psychotic disorder. For daily users, the risk increased to five times.

On the other hand, the researchers found no link between frequent use of low-potency weed (< 5 percent THC content) and psychotic disorder.

In studies like this one, it’s important to remember that correlation doesn’t indicate causation. “The authors clearly point out that they cannot be sure the association seen in their study is causal,”writes Suzi Gage, a University of Bristol researcher who studies the link between marijuana use and psychosis, in The Guardian newspaper. “The people who choose to smoke cannabis might be different in a variety of other ways, which could be the cause of the increase in psychosis risk. Although you can control for these in analyses, you can never be sure you’ve adequately adjusted for them.”

Still, the different findings for smokers of low- and high-potency weed are significant, and worth digging into — especially considering that most of the marijuana consumed in the U.S. today is of the high-octane variety. 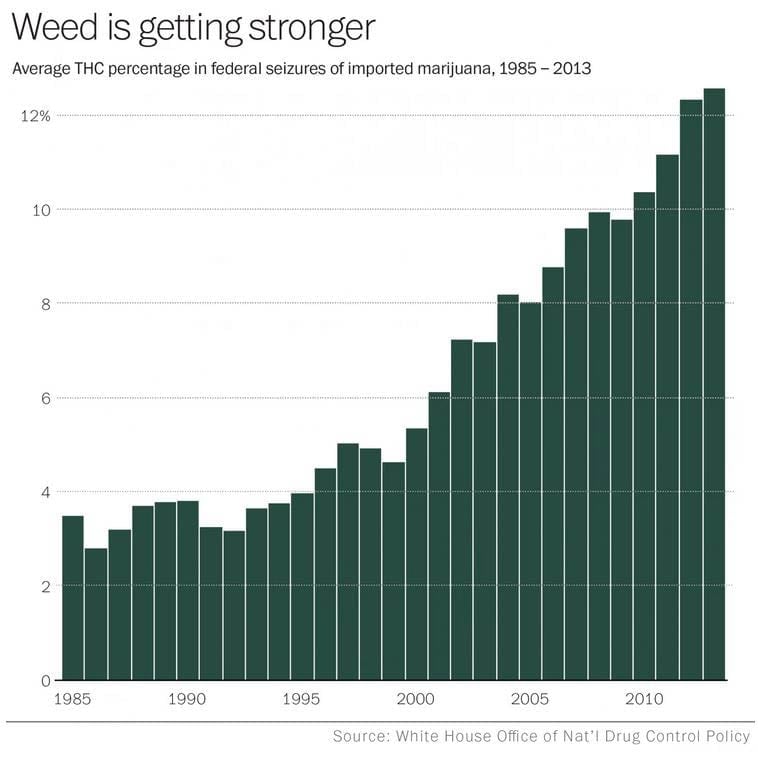 High-potency marijuana linked to health issues. As the chart shows, the average strength of weed seized by federal authorities has steadily risen over time. Retail outlets in Denver and elsewhere advertisestrains that contain 25 percent THC or more. As legalization opponents are forever fond of saying, this isn’t your daddy’s weed.

Just as you’d expect a daily pint of vodka to take a greater toll on your health than a daily pint of beer, it seems reasonable to posit that frequent use of high-octane weed will have different health consequences than a daily toke of the milder stuff. But due at least partially to the economic incentives imposed by cannabis prohibition, low-potency weed is typically harder to come by these days.

Today’s illicit weed has a lot in common with prohibition-era moonshine. To maximize profits while avoiding detection, many of today’s pot growers maintain a singular focus on boosting THC content to the exclusion of all other considerations. The weed they produce is generally good for getting you very high, but little else. The absence of a regulatory framework — particularly labeling requirements that let you know what you’re smoking — means that buying weed on the black market today is akin to buying a bottle of booze without knowing whether it contains beer or vodka.

And chemically speaking, marijuana is a more complicated substance than alcohol. The high of a given strain of bud is determined not just by THC, but by the interaction of dozens of chemical compounds in the plant that researchers are only just now beginning to understand. One of those compounds,cannabidiol or CBD, is actually known to have anti-psychotic effects, and it eases the paranoia that sometimes comes with getting really, really high. CBD and THC are present in roughly equal quantities in low-potency weed, but in the high-octane stuff CBD is essentially non-existent. This is likely one reason why the Lancet study found higher odds of psychosis among users who liked their weed strong.

As prohibition eases and legal markets open up, growers now have the breathing room to select for traits beyond high THC content. Demand from new users looking to experience a social high, rather than four hours of couch lock, will likely drive this. The end result may be a resurgence of milder strains of weed that are more akin to fine wines than to bathtub gin. From a mental health standpoint, they’ll be safer too.