Presidential hopeful Bernie Sanders announced his support Wednesday for removing marijuana from a list of the most dangerous drugs outlawed by the federal government — a move that would free states to legalize it without impediments from Washington.

The self-described “democratic socialist” senator from Vermont shared his proposal during a nearly two-hour town hall meeting with college students that he said was broadcast on the Internet to about 300 campuses across the country from George Mason University in Fairfax County, Va.

“Too many Americans have seen their lives destroyed because they have criminal records as a result of marijuana use,” Sanders told a live audience of more than 1,700 students, which erupted with applause. “That’s wrong. That has got to change.”

No other presidential candidate has called for marijuana to be completely removed from the schedule of controlled substances regulated by the Drug Enforcement Administration.

Long-shot Democratic hopeful Martin O’Malley, the former governor of Maryland, has said that he would put marijuana on Schedule 2, a less-strict designation. The party’s front-runner, Hillary Rodham Clinton, has repeatedly said she wants to see how legalization experiments in Colorado, Washington and other states play out before committing to any changes at the federal level. 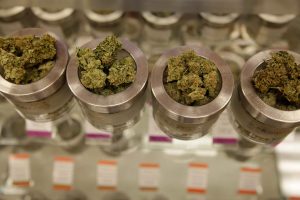 Sanders’s plan would not automatically make marijuana legal nationwide, but states would be allowed to regulate the drug in the same way that state and local laws now govern sales of alcohol and tobacco. And people who use marijuana in states that legalize it would no longer be at risk of federal prosecution.

His plan would also allow marijuana businesses currently operating in states that have legalized it to use banking services and apply for tax deductions that are currently unavailable to them under federal law.

In a 2013 memo, the Justice Department essentially agreed to look the other way in states where marijuana is legal, provided that the marijuana industry in those states remained in compliance with state laws. But that memo is not legally binding, and a new administration or a new attorney general could easily reverse course.

Marijuana’s current classification is reserved for drugs with no medically accepted use and a “high potential for abuse.”

Sanders has hinted at his position before, including during a broadcast last week on “Jimmy Kimmel Live” on ABC, during which he said: “I am not unfavorably disposed to moving toward the legalization of marijuana.”

“I will not be a president of a country that has more people in jail than any other country,” Sanders said.

He said the current classification of marijuana as a Schedule 1 drug suggests it is as dangerous as heroin, a notion that Sanders said is “absurd.”

“In the year 2015, it is time for the federal government to allow states to go forward as they best choose,” Sanders said.

In the first debate of Democratic presidential candidates, in Nevada, Clinton said she supports the legalization of medical marijuana and alternatives to imprisoning people for nonviolent drug crimes. But she stopped short of endorsing recreational legalization, saying she wants “to find out a lot more than we know today” about the experiences of states like Colorado and Washington.

Sanders’s proposal is in line with the thinking of a growing number of Americans and a solid majority of Democrats.

According to a Gallup poll released earlier this month, national support for legalizing pot is at an all-time high, with 58 percent of those surveyed supporting such an outcome.

Still, the ability of Sanders or any Democratic president to move the needle on federal marijuana policy through a reclassification of the drug is likely to face stiff resistance in a Republican-controlled Congress.

Medical marijuana is now sold in nearly half of the country, and one red state — Alaska — has legalized it for recreational use. Veterans of wars in Iraq and Afghanistan are clamoring for access to treat post-traumatic stress disorder. In three swing states — Ohio, Pennsylvania and Florida — the loosening of pot laws fares better in polls than any presidential candidate.

But in July, conservative House Republicans killed a bipartisan proposal to create a sub-class for marijuana so that researchers could simply study the substance legally and offer fresh guidance on whether it should continue to be classified alongside drugs such as heroin and ecstasy.