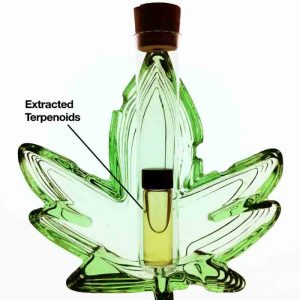 There Is An Increasing Interest In Isolated Terpenes

As you may already know, terpenes are aromatic compounds that are largely responsible for the smell and taste of cannabis. They are also believed to interact synergistically with cannabinoids to improve the efficacy of medical marijuana.

With that said, relatively little is known about terpenes as far as cannabis is concerned. Most often, the cannabis community thinks of them solely as a source of aroma and flavor in their favorite strain of cannabis. However, there are a number of possible applications for terpenes that are unknown to many people who consider themselves a cannabis connoisseur.

“There are rumors about a number of pure terpene products expected to be on the market in the very near future.”

For instance, many third-party testing facilities lab-test various cannabis strains and infused products. They are then able to use their database to determine what the average terpene profile for each strain is, and compare future test samples with these standards. The same process could potentially help determine the genetic lineage of a particular strain in a case where it is unknown.

Even further, terpenes are of interest to a number of investigators in their own right. A great deal of focus in the cannabis industry has turned towards the isolation of terpenes and the potential application of such a process. In fact, there are rumors about a number of pure terpene products expected to be on the market in the very near future – most notably from The Werc Shop and Cannabis Biotech.

Terpenoids Can Be Isolated During Marijuana Extractions

Kenny “K” Morrow is one of the most sought-after cannabis consultants in the world. Through his company Trichome Technologies, Kenny consults on everything from grow room specifications and cultivation to processing and extractions. According to him, he stumbled on the possibility of isolating terpenes while conducting large-scale cannabis extractions.

He was consistently dealt the task of handling up to 1,000 grams of winterized concentrate at one time, and quickly realized a flaw in equipment that is commonly used to purge extraction solvents. Many extract artists make use of a vacuum-drying oven in order to fully purge their cannabis concentrate, and Kenny soon realized that he was going through pump oil at a much faster rate than expected.

“Terpenes were being lost as a result of the purging process, which explains why over-purged concentrate often has little-to-no flavor.”

Assuming that moisture must be contaminating the pump oil, Kenny called the manufacturers – Across International – in an attempt to learn what was going on. He says the lab tech was very helpful in making improvements to the vacuum oven and suggested adding another component to capture the excess moisture and solvent before it reaches the pump oil.

Improvements made, Kenny soon realized that more than just water and solvent was being captured when he depressurized the chamber and was struck in the face with a splash of what he initially thought was Lysol. That being said, he quickly determined that the substance must be terpenes. The flavorful, aromatic compounds were being lost as a result of the purging process, which explains why over-purged concentrate often has little-to-no flavor.

Upon experimentation, Kenny realized he was able to collect large volumes of water and alcohol, and minute amounts of volatile terpenes. He could then winterize the solution, and be left with pure, isolated terpenes as the finished product. He was then able to separate the water and alcohol, using a graduated cylinder or seperatory funnel, and be left with terpenes as the collected product.

The Future Of Terpenes & Terpenoid Isolation

News about Kenny’s successful terpenoid isolation quickly spread and Across International soon asked him to aid in the mass production of a similar product. K agreed to help with the product, and its promotion, on the condition that they would tailor the ovens to his specifications and with the isolation of terpenes in mind.
That being noted, Kenny says that Across is currently in the beta testing phase for their cold trap / terpene accumulator, but he speculates that they could be ready as early as next month. Additionally, he predicts that they could be a game changer, allowing “every 20-something hash maker access to pure terpenes.” He contends that the process will be relatively simple and every-day extract artists will be able to reintroduce previously-lost terpenes to their finished cannabis concentrates.

Furthermore, K insists that only a small amount of isolated terpenes would be necessary as a flavor additive to finished extracts. Therefore, he expects to see a number of cannabis enthusiasts vaporizing pure terpene extracts made from their favorite strain.

Surely, increased access to the terpenes found in cannabis would warrant more research on the family of compounds. While one is able to order terpenes on the internet, they rarely, if ever, cannabis based and studies of them could be irrelevant. It is due to this that Kenny believes “terpenes are the most understudied component of the plant.” He hopes that his progress in terpenoid isolation helps add to our knowledge.

“Terpenes are the most understudied component of the plant.” – Kenny “K” Morrow

Regardless of the prospective findings, detailed studies about terpenes are sure to improve our overall knowledge about cannabis. In fact, it is not unlikely that an increased access to the terpenoids could lead to less focus on the cannabinoids in cannabis alone. As Kenny pointed out during an interview, “one plus one might equal three” when you consider cannabis and the compounds it consists of.