So, why is temperature control so important for dabbing? In a single word: terpenes. If you’re unfamiliar with terpenes, they’re the compounds in cannabis that give the plant its unique smell. Although cannabinoids are also extremely sensitive to temperatures, THC and other cannabinoids are odorless, so each strain’s compelling fragrance depends on which terpenes predominate.

Every terpene is unique in the therapeutic benefits it offers and the flavors it produces, and each individual terpene has its own sensitivity to heat, creating unique vaporization points as well. The extraction method used to achieve the oil, shatter, or wax forms of concentrate varieties, as well as the temperature at which you dab or vaporize concentrates, can greatly affect both the flavor profile and the synergy created between the concentrated cannabinoids and terpenes.

Unless you can monitor with precision (not timing or feeling or just plain guessing) and control the temperatures at which you dab, chances are you’re heating your nail above the suitable temperature range. When using a torch to heat up your dabbing surface, typically a titanium nail or a quartz bucket (banger), most dabbers torch the surface for too long. The extended exposure to such high heat can quickly result in temperatures above 1000 degrees Fahrenheit, far too hot to vaporize your concentrates effectively.

To give you an idea of the differences between terpenes, here’s a short list of boiling points for some common terpenes found in cannabis (check out the full infographic for the complete list).

When concentrates are heated the cannabinoids and terpenes are released into vapor, creating the vast spectrum of effects and flavors that cannabis exhibits. Knowing which temperature to heat your concentrates to, however, is a crucial detail and can be the difference between experiencing delicious flavors and profound effects or tasting the burnt disappointment from temperatures too hot to vaporize effectively.  Going over the needed temps range of 600-675F is just plain ruining your experience whether you know it or not, and it is creating carcinogens and other elements combine to create chemicals that are known to be unhealthy.  Some people believe dabbing at 750+ gets them a nice cloud or a big head rush, but the cloud is no longer a vapor At such extreme temperatures the essential oils that combine to produce the psychoactive effects of cannabis are effectively destroyed.  Instead of vaporizing they are combusting to learn more about the difference click here. By combusting these compounds that are directly responsible for the flavor of marijuana and its concentrated forms, the result is a burnt, unpleasant taste to the vapor. Furthermore, any benefits from the individual terpenes are lost during this process.

Luckily, the emergence of electric nails aka enails. Our 710 Life eNail has given concentrate connoisseurs the opportunity to fine-tune their experience much more accurately, and to this day is still the only AC Powered eNail to ever win a cannabis cup!…. We have 3 so far 🙂   The rise of our eNail is due in large part to the fact that they offer the ability to efficiently maintain the heat at a low temperature that allows you to capture all the cannabinoids amd their full flavor and benefits of THC, CBD, terpenes and all the other various components of your cannabis oil.

Enails, like the palm-sized 710 Life Micro eNail, make dabbing concentrates much easier and more precise. You’re able to optimize your experience to the temperature you prefer using 710 Life variable heat controller is by far the most stable temps while hitting (drawing) than any other brand on the market today! The temperature of your dabbing surface is constantly measured and adjusted to maintain even temps even while you hit, NO LARGE DIPS. Its digital display in combination with proper calibration allows for consistent temperatures and thus consistent vapor. The stability and control that the 710 Life eNail offers avoids the peaks and valleys of fluctuating temperatures from heating and cooling down your nail. It keeps your set desired temp fixed to keep you from wasting your dabs as they puddle when your nail is too cold to vaporize.

Never waste again, never get pooled up when an unknown temp, dial your temp in, sit back and enjoy your experience.

Take your dab like a pro with the 710 Life enail and take good care of your nails when done dabbing, while the remains of the dab resemble an oily liquid, wipe out your bowl with the cotton swab to prepare the rig for the next hit. While all of this may sound like a pain in the ass, once you start hitting a rig like this, you will never want to go back.

The Temperature Trade-Off
With regards to dabbing, temperature should be looked as a continuum from too low to too high:
Why you should Low Temp Dab: More flavor, smoother and longer hits
The downside: Less vapor, milder in effect, may leave some concentrate behind
Why you should High Temp Dab: Produces thick vapor/smoke, intense effects, all concentrate is consumed
The downside: Less flavor, harsh on lungs and throat, harsher and contains more unhealthy chemical bonds 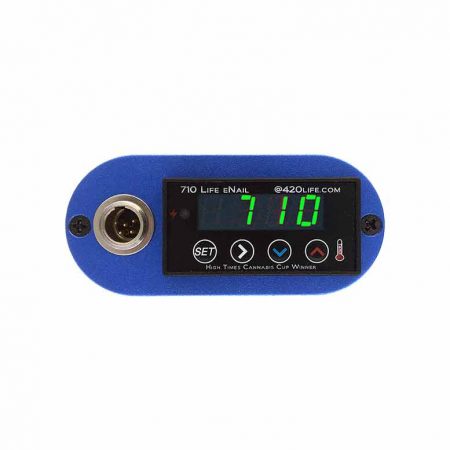